Sara's a junior Anthropology/Geography major (formerly English) with a strong history in tutoring and editing (she's been doing it since she was 12). She has a 3.88 GPA and is the resident expert in MLA and APA. Three years ago, she created the website Get the Grades You Want to help students do better in school. Currently, her videos get 1000 views a month, which isn't comparable to Gangnam Style (but she thinks it's pretty darn good).

Jordan is an Engish major at Sierra College, though with any luck at all that will soon change to “an English major at Brigham Young University: Idaho.” She holds the (somewhat dubious) honor of simultaneously working two retail jobs and maintaining a President’s Honor Roll-worthy GPA. She is also an unofficial member of the Sierra College chapter of the National Honor Society (unofficial only because those dues are EXPENSIVE). In the world of writing – creative, scholarly, and otherwise - she has served as a columnist for a church newspaper, a staff writer for her high school yearbook and literary magazine, a performer in poetry slams, and various other writing sundries.

Prior to state budget cuts wreaking their havoc, she was a student assistant for the State of California, so if you need help with anything dull and business-related she’s got you covered. Jordan also works as a tutor for Sierra College in the subjects of English A, English 1A, English 1B, and American Government. (If it hasn’t already been made obvious, Jordan is somewhat of a bookworm and a workaholic – a lethal yet fabulous combination.)

Editor: Could be you! 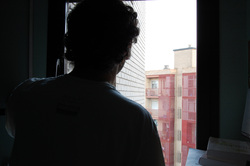 Do you like to stay up late? Do your friends recruit you to edit their papers? We're interested in hiring you! Send a resume to midnight.editors@gmail.com and a sample of your writing. We only have two requirements: knowledge of Microsoft Word (specifically the review function) and crippling insomnia.